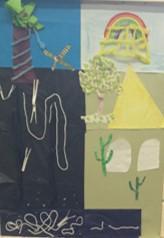 The Fall: Humans have a tendency to go their own way rather than keep their place in relation to their creator.  This attitude is called sin, and Genesis 3 gives an account of this rebellion, popularly called ‘the Fall’. This describes a catastrophic separation between God and humans, between humans and each other, and between humans and the environment. This idea that humans are ‘fallen’ and in need of rescue (or salvation) sets out the root cause of many problems for humanity.