This week, we have explored the fourness of four and how the number 4 can be represented in different ways. We have also explored which smaller numbers can be joined together to equal 4 and the properties of squares and rectangles.

This week, we have explored which smaller numbers can be joined together to equal 2 and 3. We have also explored the properties of circles and triangles.

This week, we have explored the threeness of three and we have consolidated the vocabulary and understanding of comparing numbers within three.

This week, we have explored the oneness of one and the twoness of two by looking at different representations of these numbers.

This week, we have used prepositions to describe the position of objects in relation to other objects.

Here is the vocabulary we have begun to use: 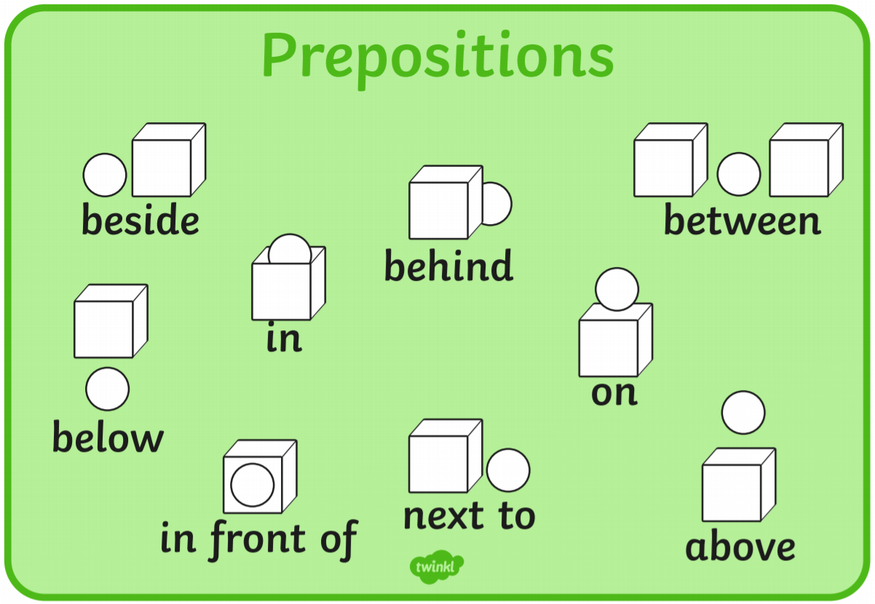 Can you use some of these words to describe where objects can be found in your home?

This week, we have described, continued, copied, created and spotted the mistakes in simple AB patterns.

For example, in the patterns below, we would describe the first pattern as a blue, red pattern and we would encourage the children to say the pattern, e.g. blue, red, blue, red...

Then, we would ask the children: What if I wanted to continue the AB pattern, what would come next? We would then encourage the children to say ‘I think that…’

Next, we would encourage the children to copy the AB patterns by colouring or using the physical objects.

After that, we'd ask the children to change or create their own AB patterns and challenge them to correct a mistake in an AB pattern.

Can you talk about the AB patterns below? 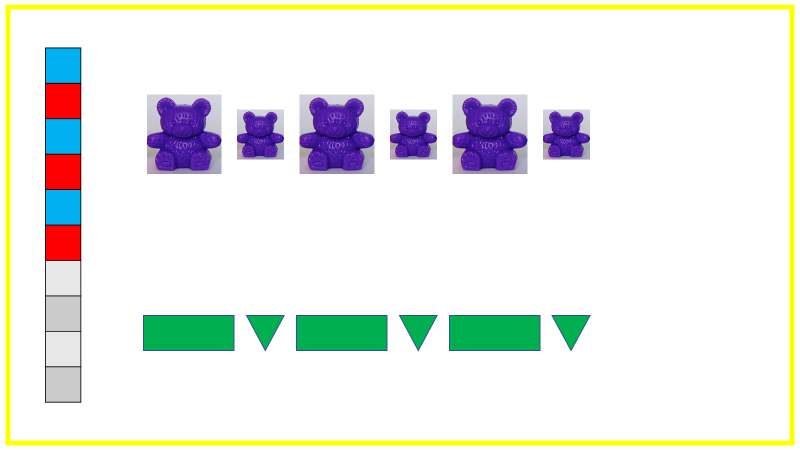 This week, we have explored comparing size, mass and capacity.

We have used words like: taller; thinner; shorter; wider; bigger; larger; smaller to compare the size of an object while using longer and shorter to describe and compare the length of an object.

We have used words like: heavier; lighter; equal to/the same mass as to describe the mass of an object.

We have used words like: full; nearly full; empty; nearly empty; half full and half empty to describe the capacity and more or less to compare.

Can you use the vocabulary to discuss the height and length of objects in the picture below? Can you use the vocabulary to discuss the mass and capacity of objects in the picture below?

Over the past two weeks, we have practised our matching and sorting skills. We have thought about what we have noticed and what is the same and what's different. When we have sorted, we have sorted in different ways, including colour, shape and size. We also encourage the children to speak on full sentences when they are explaining their thinking. So if they are asked 'What do you notice?', we expect them to start their answer with 'I notice that...'.

Over the past two weeks, we have sang number songs to support children in being able to recite numbers forwards to and backwards from 10, and beyond.

We have also used a counting stick to count forwards and backwards. Gerald the Giraffe challenged us to work out which number he had pointed to on the stick, without counting!